Here’s a thrilling bit of lost Los Angeles lore worth shining a torch on: after San Francisco’s celebrated Panama-Pacific International Exposition folded up its tents in late 1915, clever promoter H.W. Nixon brought quite a number of the midway attractions from “The Zone, the Street of Fun” down to Broadway, where they filled the old Boston Store building. 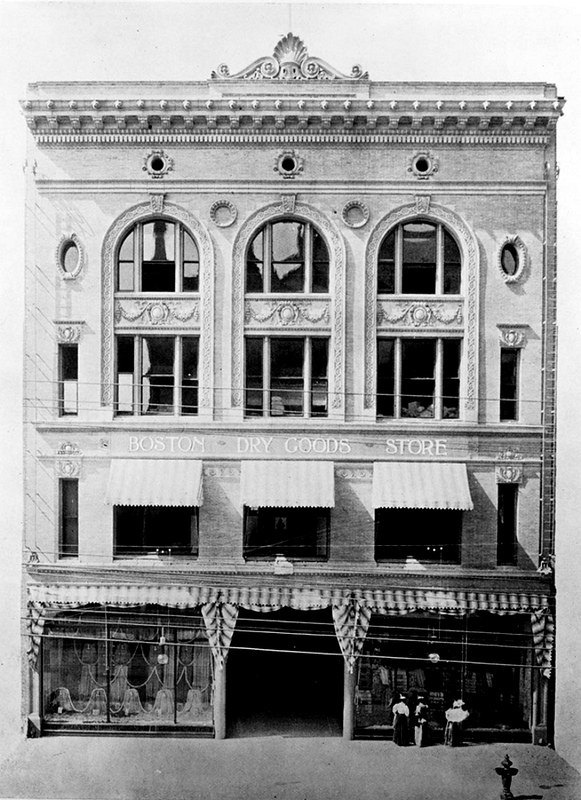 The Boston was the department store founded by the Robinson family; the building, missing its upper stories, today houses a wedding chapel.

Above: Some of the daffiness to be found on “The Zone.”

The Los Angeles Prosperity Carnival and Indoor Fair opened at 6pm on Saturday, December 11 to an audience of 5000 eager souls, and for the next 30 days, there was no place more amusing — or peculiar — in all the southland. 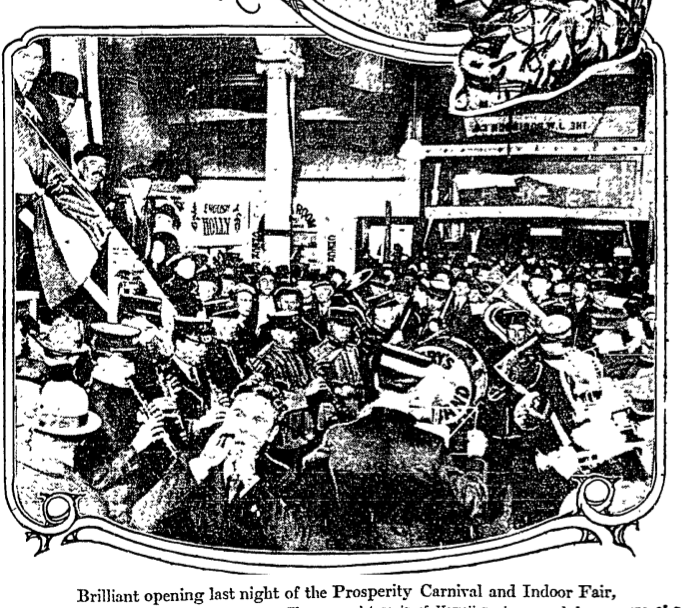 Above: Huge crowd celebrates the opening of the festivities. Photo: LA Times

The fair began with the “wedding” of Mr. Midget (real name: Lajos Matina, one of the Hungarian Matina triplets, all later Wizard of Oz Munchkins) to Miss Midget (Elise Broek). The couple were residents of Midget City, whose troupe appeared under the leadership of Prince Ludwig, whose professional bio had him a wee member of European royalty. Miss Midget, by the by, was a suffragette. 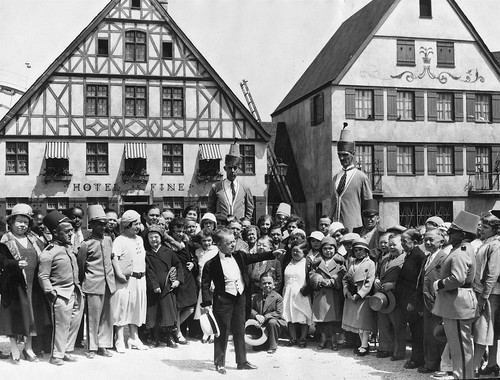 Above: Prince Ludwig addresses his subjects at Midget Village, an attraction at the 1933 World’s Fair. Photo: Chicago Tribune

Prize rabbits and pigeons by the hundreds were exhibited, with Los Angeles husbandry clubs competing against those fuddyduds in Pasadena.

Above: Officer Payson at the PPIE, where she protected lady fairgoers from mashers. Photo: Collier’s.

Like large ladies in uniform? (Who doesn’t?) Then you won’t want to miss an audience with Mrs. Blanche Payson, popular 6’4″ PPIE policewoman, who was on display in her cute “coppette” garb. You can still enjoy Mrs. Payson in some classic short comedies.

Hold your nose on the third floor, where a grand cat show, organized by the Los Angeles Cat Fanciers Association, featured prize-winning kitties from overseas and around the country. 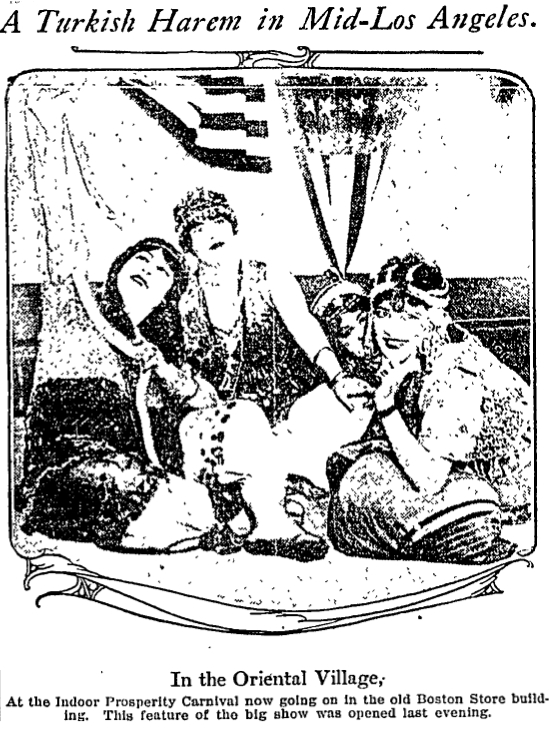 Above: Some of the pretties on display. Photo: LA Times.

The fifth floor was transformed into an Oriental Village staffed with young lovelies, each of them a “real Egyptian princess” and a talented dancer. They also had a pet serpent named Zoo, and Turkish cigarettes and water pipes available for male visitors to sample. This show was developed for the 1893 Chicago World’s Fair and had been touring ever since.

“In Old Hawaii,” a song and dance show, was considered one of the higher-class attractions of the fair. 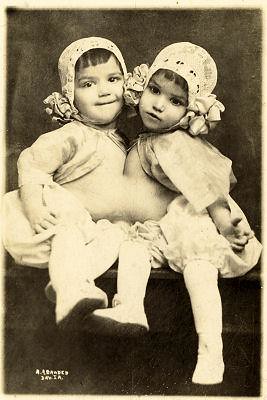 Then there was a Human Fish, who appeared to eat, drink and sleep inside his tank. And a chance to coo at the three-year-old Cuban-born Siamese twins Josephina and Guadalupe Hinojosa.

But wait, there’s more! All the way from Van Nuys come… (wait for it)… 500 high-class chickens. Under the direction of W.P. Whitsett of the Chamber of Commerce, locals brought their best birds to show off the suitability of the SFV as a center of chicken ranching. The first such ranch opened just three years ago, and by 1915 there are 150 of them. The aim was to “make Van Nuys the Petaluma of Southern California.” Favorite entrants included Lord Roselawn I, a majestic White Leghorn rooster and Sport, a Barred Plymouth Rock. Also on view: fighting cocks who battled in cages.

And for the kiddies, Santa distributed gifts beneath one of the largest Christmas trees ever brought to Los Angeles.

One of the weirdest elements of the fair was the Baby Bollinger Show, a wax replica of the malformed Chicago infant whose death the previous month had been national news. Allan Bollinger had the misfortune to be under the “care” of Dr. Harry Haiselden, a proponent of euthanasia and eugenics who not only convinced the boy’s parents to let their “sure-to-become-a-criminal” infant die rather than attempt any lifesaving surgeries, but actively sought media attention for doing so. The controversy over the Bollinger case led an ethics complaint against Haiselden, who would later star in an autobiographical pro-eugenics film called The Black Stork. 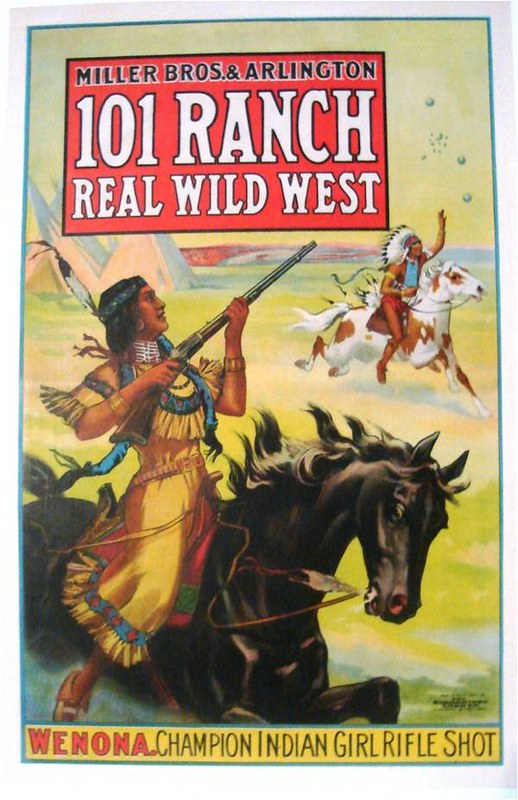 And then there was Princess Wenona with her Miniature Wild West Show. Princess Wenona, previously called Lillian Smith, perched atop her piebald pony Rabbit, was a star marksman in the 101 Ranch wild west show and had appeared with Buffalo Bill Cody in the 1880s. Her theatrical back story claimed that her mother was kidnapped by Sioux Indians, and that Lillian was the result of a liaison with Crazy Snake, a chief.

She was of Indian ancestry, just not from the Plains. In fact, she was born in Coleville, near the California-Nevada border. At 7 she got her first rifle, and became the terror of the Yosemite bird population. In her teens she joined the Buffalo Bill show and played to crowds of up to 200,000 in Staten Island, NY. 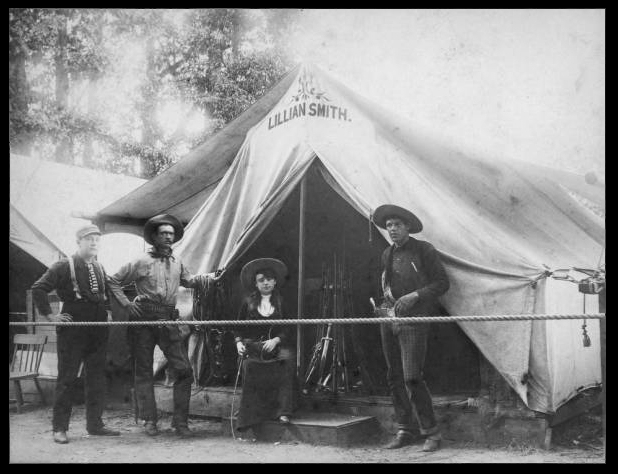 Above: Lillian Smith on the road, with performer friends and her rifle collection.

She was billed as “The California Huntress,” “Champion Girl Rifle Shot” and “The California Girl,” and a prize of $10,000 was offered to anyone who could out shoot Princess Wenona. They say nobody ever claimed that prize.

She had a great rivalry with the established performer Annie Oakley, who began lying about her age as Wenona’s star ascended. In 1887, both women performed in England on the same bill. At a special performance for the Queen, it is said that Victoria rose for the first time in her life to salute the American flag. While in London, Oakley quarreled with Bill Cody and left the show, leaving Wenona the sole star lady sharpshooter, until Oakley and Cody made up. 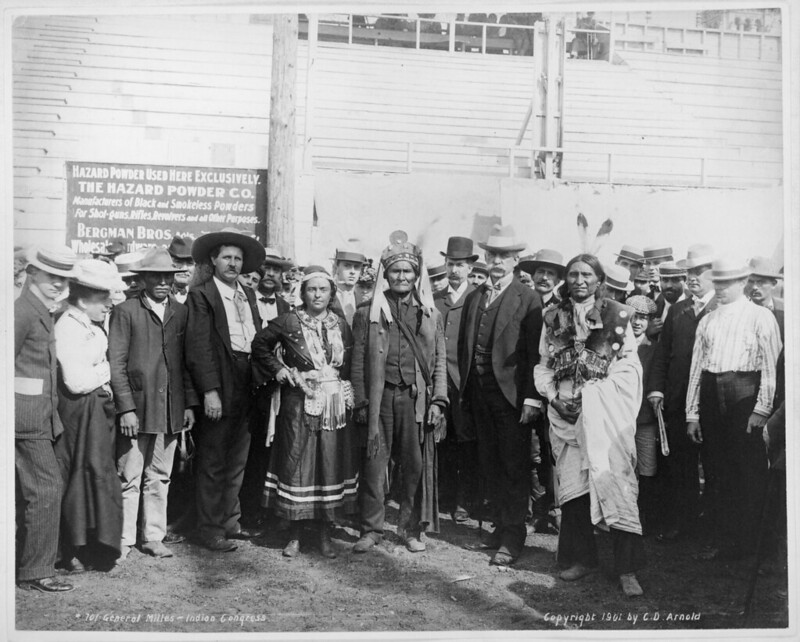 Above: Princess Wenona with Buffalo Bill Cody and the famous Apache leader Geronimo, 1901

In later years she became rather plump, drank too much and had several unhappy marriages, so by the time she played the Prosperity Carnival, we can assume she was not the star she’d been. Still, such tricks as shooting out a candle flame or the ashes off a man’s cigar remained crowd pleasers.

She retired around 1925 and lived out her days on a ranch in Oklahoma with many former Wild West Show friends and dozens of stray dogs that she cared for. She died during the bitter cold winter of 1930, aged 59.

And these are just a few of the more than 150 shows and 200 concessions on display at the Los Angeles Prosperity Carnival and Indoor Fair. Don’t you wish you could have seen them all?