In an era where a celebrity journalist like Dominick Dunne (1925-2009 R.I.P.) covered the sordid murder trials of O.J. Simpson, Robert Blake and Phil Spector it should be noted that this is not a new phenomenon. 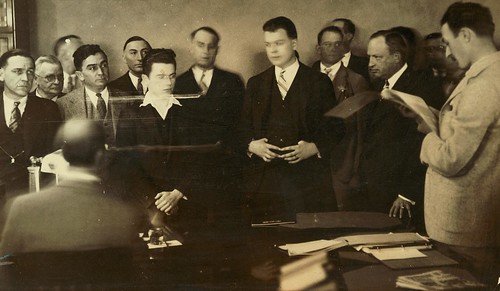 Case in point- was the 1928 trial of William Edward Hickman for kidnapping, murder and dismemberment of Marion Parker.   For two tension packed weeks the trial created such a sensation of tabloid headlines that even Charlie Chaplin came to the Hall of Justice to get an up close and personal look at Hickman.  Famed journalist and screenwriter Adela Rogers St. Johns attended and reported on the trial just as she had done during the prosecution of Loeb and Leopold and later Bruno Hauptmann for the Lindberg kidnapping.

Edgar Rice Burroughs famed fantasy author best known as the creator of Tarzan of the Apes covered the duration of the trial in 13 columns for the Los Angeles Examiner.  The articles can be found at https://www.erbzine.com/mag17/1768.html

It is particularly interesting to see how Burroughs in this series of OP-ED pieces  thinly disguised as columns gave it his best effort to seal Hickman’s fate.   Hickman’s guilt was never in doubt but his counsel presented one of the earliest attempts at the insanity defense.  Not only did Burroughs not buy into Hickman’s defense attorney’s contention that their client was insane, Burroughs protested that he didn’t see any need for a trial at all.  And Burroughs sarcasm was evident when he mocked the defense’s dermatography demonstration by trying it at home with his own son. In the test actually performed at the trial, Hickman removed his shirt and his skin was scratched with a metal object.  According to the defense in explaining the significance of dermatography, a bright colored long lasting mark was supposed to prove mental instability. 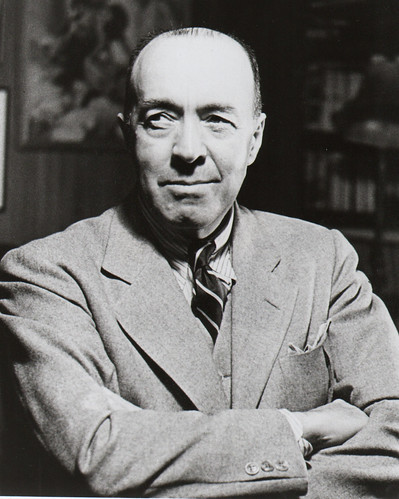 On the other hand Burroughs nicely encapsulated a couple of the trial’s most dramatic and emotionally wrenching moments.  When the autopsy photos of Marion Parker’s nude dismembered body were passed to the jury, the woman in the third seat was so overwhelmed by the first of these black and white 8X10s that she fainted on the spot.  And the most dramatic moment in the trial was the appearance and testimony of the prosecution’s last witness, Marion’s father Perry Parker.  In the winter darkness of December 19, 1928 Parker delivered the ransom to Hickman on South Manhattan Place. When Hickman opened the car door, Marion tumbled out just as Hickman sped off.  Parker ran up to find an unspeakable horror.  Lying in the gutter was the lifeless body of his daughter still wearing her little gingham dress.  Rouge had ghoulishly been painted on her cheeks.  Her limbs were missing and her eyelids had been sewn open.   It was a crime that continues to shock for its brutality over eighty years later.  Hickman’s insanity defense was rejected by the jury and he was executed by hanging at San Quentin on October 19, 1928.  Hickman got weak in the knees as he began to climb the steps of the platform and had to be carried the rest of the way to the top.  But that was just a prelude for the real drama. Hickman’s head hit the opening of the chute when he dropped, breaking his fall rather than his neck.  It took William Edward Hickman over 15 minutes to die that day by suffocation.  Observers reported that the drawn out death scene was so disturbing to watch there were shrieks from the audience and numerous people fainted, including Dick Lucas one of the key detectives who had been involved in the investigation. 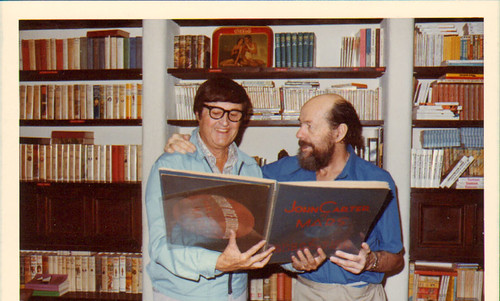 Bob Clampett and John Coleman Burroughs: Clampett and Burroughs reminisce while holding original John Carter of Mars material. This photo is from the early 1970’s.

My dad was only a couple of years older than Marion Parker.  About the time of the murder he attended the original Otis Art Institute downtown which he would travel to by streetcar. Another student driven by chauffeur in a limosene became one of my dad’s lifelong friends.  It was John Coleman Burroughs, second son to Edgar Rice Burroughs.  My dad, already a big fan of Burroughs’ books, visited the Burroughs home frequently and soon got to know the elder Burroughs.   Several years later when my dad was an animator at Warner Bros. studio he partnered with  Edgar Rice Burroughs and son John Coleman to bring Burroughs’ vision of his Mars series to the silver screen via animation.  They worked nights and weekends for over a year and completed quite a bit of development artwork, script treatment pages and a one minute sales reel showing what a John Carter of Mars animated feature might look like.  At that time MGM couldn’t see past the success of the live action Tarzan films they were producing.  To finance an animated feature was not a proposition that appealed to them at all.   Here’s a youtube link to the reel with an audio track of my dad narrating.

This piece originally appeared on the DVD, Beany and Cecil The Special Edition Volume One released in 2000.  There have been many other unsuccessful efforts over the years to bring Burroughs’ Mars stories to the screen.  However Pixar/Disney is now at work on John Carter of Mars, their first film that will include live action characters blended with CG animation.

Other notable Otis alumni from the 1920s included the two very talented brothers Bob McKimson (creator of Foghorn Leghorn) and designer and layout artist Tom McKimson.  Both brothers later worked with my dad at Warner Bros. Cartoon studio. There was also George Maitland Stanley (designer of the Oscar statue, the Astronomer’s monument at the Griffith Observatory, and the fountain at the Hollywood Bowl),  John Hench (Key Disney artist for over 65 years and Tyrus Wong (another Disney artist who worked on Bambi) and is now 99 years old. (Otis later became Otis College of Art and Design.)

My dad stayed in close contact with the Burroughs family throughout his life.  Danton Burroughs, John Coleman’s son and keeper of the Burroughs legacy, passed away last year.

Thanks to Bill Hillman of Erbzine.

Thanks to Sarah Russin, Director of Alumni Relations at Otis College of Art and Design.

Thanks also to The Watson Family Archive and to Delmar Watson (1926-2008 ) who was like a second father to me.