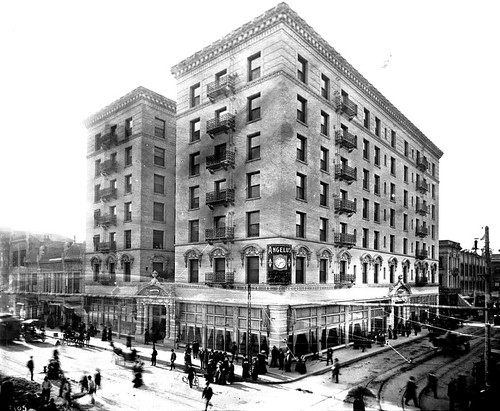 Hearing shouts of alarm from down the block, the office workers, tourists and shoppers in the lunch-hour crowd thronging the corner of Fourth and South Spring streets one cold afternoon in 1905 turned to see a runaway horse, pulling a light runaround cart, charging towards them with frightening speed.

Some of them ran for safety, some froze, too scared to move; none of them tried to stop the horse – it would be madness even to try.

Luckily, the police officer who was on duty at the intersection that day was Patrolman Billy Matuskiwiz, who happened to hold the record among patrolmen for stopping runaway horses, having bravely halted 20 during his 12 years on the force.

Officer Matuskiwiz stepped to the middle of the street and waited as the horse sped towards him. When it drew near, however, it swerved and dashed straight toward a crowd of tourists outside the Angelus hotel. Matuskiwiz leaped at the horse but found that it had no bridle or halter. Some men would have given up at that point, but not Officer Matuskiwiz, who decided to throw his arms around the animal’s neck and squeeze its throat with all his strength, clinging on as it flung its head back and forth to throw him off.

Half a block later, Matuskiwiz had succeeded in choking the horse into submission, and brought it to a halt just outside the hotel. As Matuskiwiz led the animal away, the crowd burst into heartfelt applause. 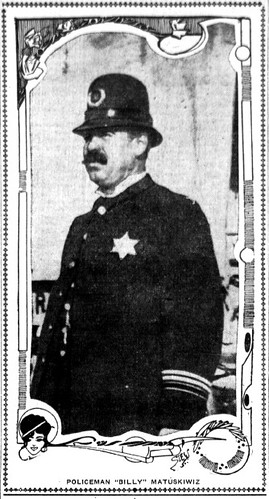 Five years later, Matuskiwiz was interviewed for a short piece in the Los Angeles Herald, which introduced him as a remarkable man “who bears the enviable record of having saved a human life for each of his seventeen years of service.”

The character sketch portrays a humble, hardworking figure: “William Matuskiwiz, who holds down a night beat on Spring and Main streets between Sixth and Seventh streets … is a blunt, plain spoken man and a poor politician. He wears no sergeant’s stripes on his sleeve and despite the years of faithful service in the interest of the city he is still just a plain patrolman with no ax to grind in the politics of the police department.”

The piece focuses on one particular aspect of his character, which it holds up as something of a novelty: “Unlike many of his fellows, he is in full sympathy with the prison reform movement.”

How bizarre! At the start of his career, Matuskiwiz was apparently “a firm believer in the iron hand for the man in the shadow of the law”, but he soon came to believe that “kind treatment of prisoners and a recognition of their rights bring the best results.”

The newspaper allows the officer a few paragraphs in which to relate the event that made this horse-choking man of steel adopt such a tender philosophy. It features runaway horses, which may well have been a necessary element of all of Matuskiwiz’s stories.

“I was taking Juan Silvos, a young Mexican charged with a heinous crime, to San Quentin,” explained Matuskiwiz. “Silvos had ten years at hard labor staring him in the face. I kept him handcuffed to me on the train. At San Francisco we missed our boat by a margin of several minutes. It would be an hour before the next one would leave. My prisoner complained of being hungry, and somewhat in the same frame of mind myself, we started across Market street in the direction of a little restaurant. Silvos was handcuffed and I held him by a small chain.

“When we reached the center of the street I heard a woman’s piercing scream and looking back saw a little child some four or five years old toddling from its mother into the path of a runaway team. The horses were within several feet of the child. I forgot all about the prisoner in the child’s danger, and springing forward almost before I realized what I was doing, had snatched the little girl from under the horses’ feet. In the meantime the mother had fainted and in the excitement of the gathering crowd I ran to her side with her daughter and lifted the mother to her feet. The woman recovered and wanted to know who I was. Her question brought to my mind the fact that a ten-year prisoner was in my charge. Silvos in the meantime had had plenty of time to escape, but turning around I found him at my side quietly looking on. I asked him why he had not attempted to escape. He told me that I had thought of him when he was hungry.

“Instead of taking him to San Quentin on the next boat I immediately took the handcuffs from his wrists and showed him the town. We took in everything that was doing, had several good dinners and caught the night boat to the prison. I told the warden of how he had acted and the chief promised to take his good behaviour into consideration.

“Silvos was released less than a year and a half after he had been confined. I meet him on the streets occasionally and he is profuse in his thanks. That little experience changed my whole idea of criminology. From that time on I became a firm believer in giving the prisoners a show and treating them like human beings.”