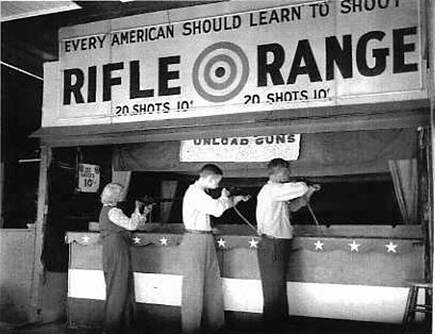 Before it became home to B-girls in the 1950s, 513 South Main Street was the location of a shooting gallery.  I have never understood what would compel a person to open a business that involved handing a stranger a loaded weapon.   There’s just no way to tell if the person on the firing end of the rifle is depressed or angry until it is too late.

On December 2, 1939 a patron of the shooting gallery used his last quarter to buy six shots. He fired five times at the moving targets before he turned the weapon on himself and fired the remaining slug into his heart. He died at the scene.

It was December 14, 1940 when Duncan Adams, 37, an employee at a local dairy, strode up to the gallery, gave the clerk a quarter,  and started to pick off targets shaped like furry little squirrels. He emptied the rifle, but then reached over and grabbed a .22 caliber target pistol and squeezed the trigger. The gun misfired, but before any of the witnesses could stop the man he frantically pulled the trigger until the sixth chamber clicked into place and discharged a bullet which ripped a hole through his skull. He died four hours later at Georgia Street Receiving Hospital.

The last tale in this grim litany occurred on September 23, 1942. In exchange for the usual quarter, Thomas Nelson, the proprietor of the shooting gallery, handed 22 year old Willie Davis a rifle. Nelson said that Davis had attempted to steal the rifle, so he grabbed another weapon and pursued him down Main Street. Davis claimed that Nelson had tried to fight with him after renting him the rifle and he was just trying to get away.

In any case the ensuing gunfight sent bystanders fleeing for cover, and tied up traffic along the busy street for at least twenty minutes.  Both Nelson and Davis were seriously wounded. Also wounded in the melee was John Hagen, an innocent bystander, who was seated at the counter of a nearby café. Hagen was shot through the right forearm.

The B-girls who eventually replaced the rifles at 513 South Main Street could be dangerous when loaded; but perhaps less likely to kill.