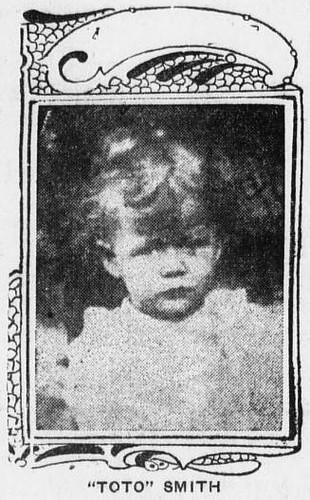 “Toto”, the two-year-old daughter of Mary Smith, a single mother who had a room in the home of the Harver family at 634 Gallardo street, went missing one spring day in 1906. Mary’s neighbors, who rushed to the house to comfort her,  soon confirmed that each had seen the same distinctive beggar woman drifting down the street earlier — a “strange creature” who “several times … remarked that she had no means of earning a livelihood.”

From the women’s description, the police identified the beggar as Lizzie McGuire, who was well known to them, and not only because she had survived being shot some years ago by her boyfriend, Paddy Walsh, who was now serving a sentence in San Quentin. They suspected that she had taken the little girl either to hold her for a reward or to carry along with her on one of her periodical begging tours of the country. The latter possibility was bolstered when they discovered that Lizzie had fled her quarters in a rooming house on East Second street the day before.

While police departments across southern California were contacted with details of the case and photographs and descriptions were sent out of Toto and Lizzie, a detective called Roberds doggedly searched second-class lodging houses downtown, following a sighting of the woman on the corner of Fifth and San Pedro.

Five days after the abduction, during which time Lizzie had dragged the child around various run-down establishments in an attempt to evade capture, Detective Roberds tracked her down in a dingy room in 644 San Julian street.

Lizzie, who “sullenly refused to say anything to detectives when her lair was discovered”, was arrested. However, as the police had known all along, she would never be prosecuted. She had survived her boyfriend’s attempt to kill her all those years ago, but she hadn’t exactly come through unscathed — the shot that he’d fired had hit her in the head, leaving her not only with a bullet scar on her forehead that made her detection by the police far easier than it would otherwise have been, but also with a brain that didn’t quite work as well as it used to. The prosecution was over before it began: Lizzie was deranged, and therefore mentally unfit to stand trial.

And Toto? She was returned to her tearful mother, apparently physically unharmed, although she appeared wan and was “sadly in need of a bath”.