Who was this hermit, the man who lived in the woodshed in the backyard of 651 South Main Street? Was he Joe Albrecht, waiter at Warner’s 5-cent restaurant, or Joe Miller, the delivery-man, or Joseph Albrecht Jr., well-born denizen of San Francisco society? Whatever his legal name, Joe lived like a pauper but died a seemingly wealthy man, with at least a thousand dollars in three bank accounts and mining stocks of unknown worth. He also left behind volumes of poetry, love letters, and the beginning of what might have been his autobiography. It tells the story of a man born to a noble and wealthy family, but so hideous of countenance, so distorted and dwarf-like, that he is shunned by his family and brought up by an old and childless woman who takes pity on him.

His neighbors reported old Joe had told them in the recent past he had frequented such fashionable San Francisco clubs as the Olympic and the California, that he was a member of good standing in society up north, and that he had lost all his fortune in speculation in mines and real estate. He told one friend that he was hoarding money with the goal of regaining his position in respectable society. One of his many vocations was dealing in junk, which explains why the woodshed appeared to serve double duty as a storage facility. 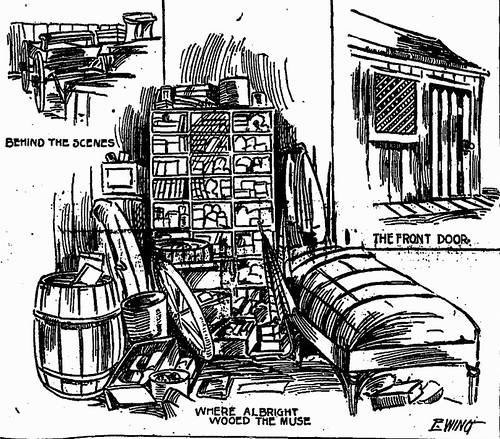 Joe’s collection included antique buttons, cords of wood, faded summer parasols, piles of old tobacco, boxes of discarded salve bottles, matting, broken clocks, curtain rings, outdated encyclopedias and newspapers of all kinds, . Joe’s carthorse shared the premises as well. The horse’s stable was somewhat insulated from the elements, but Joe chose to forgo that expense in his own quarters. In fact the whole front wall of his house was constructed of the same open latticework one would use in a chicken coop. The last few days in Los Angeles in February had turned unseasonably and brutally cold. The old man had tried to insulate his bedchamber with newspaper. He likely died of exposure.