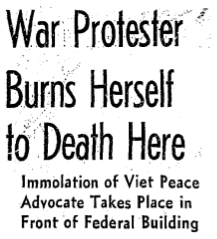 Late on Sunday morning, Florence Beaumont, 56-year-old former English teacher, Unitarian peace activist and mother of two, gathered a selection of literature pertaining to her activities in the anti-Vietnam war movement, climbed into her pickup truck with its Peace and Freedom Party bumper sticker and drove from her home in La Puente to downtown Los Angeles.

At 1:05pm, after climbing the steps of the new Federal Building, Florence poured most of a can of gasoline over herself, put the can down on a wall and lit a match. She immediately erupted in flames, let out a cry, and walked about 40 feet before collapsing, an unrecognizable charred mass. Over by the gas can was her purse, with a card taped to the front which read “Hello, I’m Florence Beaumont.” 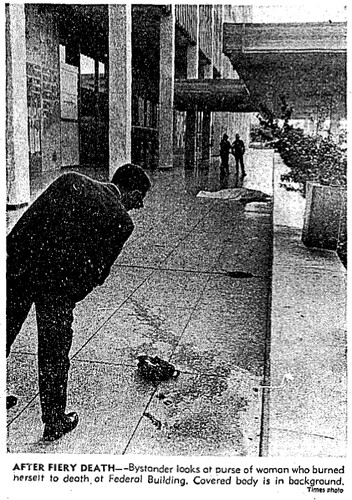 Federal Building guard Ben Brown heard a scream, ran outside and saw the woman in flames. He returned to his post for a fire extinguisher, but arrived too late to help her. Retiree John Osberg was sunning himself on the steps nearby and heard a moan, looking up to see Florence burning and walking along the veranda. “There were flames all over her. She didn’t say anything, she just moaned. She was burning from head to foot.”

Two nights earlier, Florence had told a friend, Ada Pettigrove, that she had been thinking of immolating herself. Ada told her not to talk like that, and put off mentioning the conversation to Florence’s husband George because she had to leave for San Diego to retrieve a lost dog. “I really didn’t think she would carry it out. I guess I really didn’t know her that well.”

On Tuesday, Florence’s widower George held a press conference at the Greater Los Angeles Press Club, where he read a prepared statement saying that he had not known what she planned to do. He said his wife had been deeply troubled because it seemed that elected officials didn’t care about her concerns.

She had “a deep feeling against the slaughter in Vietnam… She was a perfectly normal, dedicated person, and felt she had to do this just like the [monks and nuns] who burned themselves in Vietnam. I never felt she would take this road, but I can see how she might have felt she had to do it…. This was no suicide. There were no indications of escapism or frustration. This was an immolation, a supreme sacrifice to humanity, to peace and freedom for all mankind. In a sense, it was a religious rite far beyond the hypocritical posturings of orthodoxy… The barbarous napalm that burns the bodies of the Vietnamese children has seared the souls of all who, like Florence Beaumont, do not have icewater for blood, stones for hearts. The match that Florence used to touch off her gasoline-soaked clothing has lighted a fire that will not go out–ever– a fire under us complacent, smug fat cats so damned secure in our ivory towers 9,000 miles from exploding napalm, and THAT, we are sure, is the purpose of her act. “

Exactly one week after her death, 500 people gathered at the site of Florence’s immolation to honor her memory. She was one of five people who died after setting themselves ablaze in America to protest the war in Vietnam. Eight years later, the war ended.