“Captain” Maximilian Wolf, self-styled, was a visionary of early Los Angeles. He arrived from San Francisco with a colleague who planned to host a fair at Hazard’s Pavilion at 5th and Olive, went mad for a spell, was freed, then entered into a period of creative mania.

In 1896 he sought to demonstrate the efficacy of his theories on alternative transport by way of a Water Bicycle, a device comprised of two fifteen-by-two-foot pontoons on each of which a bike was placed. By pushing the pedals, a series of cogs revolved, eventually powering two fishy fins beneath each pontoon. Put an awning up, and one could enjoy a cigar or cool tea on the open water. A rudder, at the front of the device, turned with the handlebars–but Wolf refused to tell reporters what would happen if the two riders wished to go in different directions. 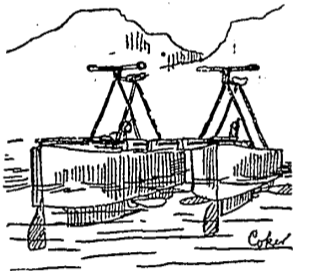 Perhaps this is a design flaw the good “Captain” should have paid more mind to, as the planned date for his demonstration ride in early 1896 slipped always over the next wave. For machine shop owner S.D. Sturgis, who had built the marvel “on spec” was now holding the craft hostage in the back of his store, insisting Wolf pay for the work before any lakeside show was put on. When Sturgis appeared, a nervous Wolf scurried off, mid-interview with a man from the Times.

Months passed, and there was no report of the wonderful Water Bicycle ever getting wet. Wolf turned instead to designing an air ship and told all who would listen how marvelous it would be when completed.

Then in September, Wolf took a most peculiar cab ride with a hack called H.A. Lowell. He asked first to be taken to County Hospital, complaining on the way of blood poisoning. But on learning there were no private rooms available, he asked Lowell to continue on to Boyle Heights, to his old friend Mrs. Hollenbeck’s home where all the old folks stayed. He wrote a letter in German for the lady, but she claimed not to know him and turned him away.

From there, Lowell was compelled to convey Wolf to a nearby nursery, where the German proprietor reluctantly admitted to knowing the passenger, but refused to loan him $5. Then Wolf asked to be taken to the Masonic Hall, but the exasperated Lowell took him instead to jail, where he was relieved of his gold-headed cane and the lunacy commission called in.

Wolf then vanishes from the record, and his marvelous, futuristic craft with him.