Walking in the alley behind the Sisters of Mercy building, where unfortunates were fed and housed, Fred Forsberg made a grim discovery: a partially mummified section of a human skull, with incongruously handsome, twirled moustaches above the former lips. The top of the skull had been neatly sawn off, suggesting the corpse had paid a visit to an anatomical laboratory.

Forsberg attempted to interest the police in his discovery, but to them it looked too old to be worth investigating. They did, however, deign to attach a note which read “ex-police reporter” and parked the relic in the station’s reporter’s room. And it was this prank which resulted in a few inches of column space in the Times the following day, and keeps alive the memory of this nameless posthumous denizen of SRO Land. Here’s to ya, fella, whoever you were.

New Yorker C. Wilson Porter was a notable Gilded Age Angeleno, young, rich (due to a relative who had patented a type of suspender button), alcoholic, obnoxious and very fashionable, with a tendency to camp out for long periods in absent friends’ homes enjoying their hospitality without permission (Mrs. Mary Banning successfully sued him to recover what Porter spent on himself and friends while she was in Mexico, settling for a token $1/day). In April 1899, Porter got into a weird altercation with George W. Durbrow, general manager of the New Liverpool Salt Company, which extracted high quality rock salt from the desert zone that would a few years hence be inundated by the Salton Sea, leaving Mr. Durbrow recuperating at the Van Nuys and seeking $25,000 in a civil suit for painful and disfiguring injuries. 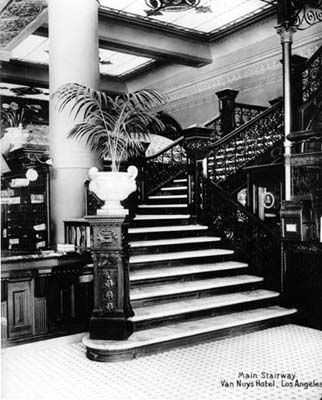 It seems the men were in the Van Nuys hotel bar around one in the morning when Porter decided it would be fun to take some popcorn and “make a snowstorm.” Durbrow thought the suggestion was an affront to his dignity and went to leave, but Porter insisted he play, finally chasing his erstwhile pal, yelling “You can’t shake me this way!” The men found themselves outside the Main Street entrance, and as Durbrow turned, Porter — who was much younger and stronger and drunker — slugged him. Durbrow was knocked out, and Porter began jumping up and down on him and hitting him in the face. Hotel employees heard the ruckus and rescued the unconscious man. 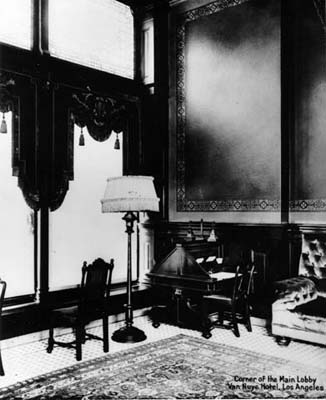 Porter promptly vanished from town, as Officer F.M. Fowler searched widely for him. He was believed to be hiding at Charley Hastings’ Ranch in Sierra Madre, outside the Sheriff’s territory, then to have fled to New York. In June, a deputy assessor entered Brown’s Livery Stable at Hoover and 32nd and found a fine hansom cab, which he immediately recognized as Porter’s–because Porter was the only man in Los Angeles who owned one, having imported it from NY. It was seized for failure to pay $5.72 in property tax, and was to be auctioned off by the city, but Porter’s attorney reclaimed it. In November 1900, Porter came back to town in search of companionship, and checked again into his favorite hotel, the Van Nuys. While riding in a cab down Main Street with his friend Mr. Blaisdell and a hotel employee, young Porter became truculent at a traffic jam around Seventh Street, and kicked a hole in the window. When he refused to pay $15 for repairs, suggesting that $5 should be sufficient, the irked driver (who was soaked to the skin from heavy rains, while his passengers enjoyed the shelter of his cab) simply locked the door, and delivered the famous fugitive to the police station to face justice. But if you are expecting some punishment befitting his myriad offences, you forget that this was Los Angeles and the year 1900. Porter was simply booked on a charge of disturbing the peace, and released upon paying a fine of $25. We do not hear of him again. For more on George W. Durbrow’s salt works, see https://www.sci.sdsu.edu/salton/PeriscopeSaltonSeaCh1-4.html And the following link, which includes photos and descriptions of poor Durbrow’s losses when the river rushed in to the salt flats https://pacificmonthly.notlong.com (Van Nuys Hotel interior photos, LAPL collection)