This battle of titans began in the fall of 1894, when the miraculous magnetic healer known as the Boy Phenomenon (aka Dr. Stuart Franklin Temple) came to the city “with Healing in his Hands,” offering his free curative powers to the deaf, blind, sick lame, paralytic and whomever else who managed to drag themselves to the Los Angeles Theater. Before the healing commenced, Temple’s manager, the Great Diagnostician Professor W. Fletcher Hall, lectured on the medical research supporting the application of Vital Force and Animal Magnetism.  The duo took the show on the road to Pasadena, San Bernardino and San Diego, but then parted ways in 1895.  The following year, Professor Hall reappeared in Los Angeles with a new protégé, a young German boy he discovered among the “rubbers” in the Turkish baths at St. Louis, who must have impressed Hall with his restorative manual dexterity.  His given name was Carl Herrmann, but Hall dubbed him The Boy Wizard, and distinguished him in advertisements from Dr. Temple by claiming he “daily generates ten times more magnetism that the former Phenomenon.”

The Boy Wizard began his run in January of 1896 at the Music Hall, and also offered private consultations at $1.00 a pop at the Pacific Coast Magnetic Institute, his and Hall’s establishment on Third and Broadway. Unlike the Phenomenon, the Boy Wizard allegedly possessed a deft touch with the ladies.  According to his manager the Boy Wizard had an  “unbroken record in treating complaints peculiar to the gentler sex and his Magnetic Force has proved a boon to the suffering woman.”

It didn’t take long for the erstwhile Phenomenon, Dr. Temple, to discover that the Wizard’s ads featured the same testimonials as his so recently had, and Temple promptly brought suit against the magnetic newcomer.  The lawsuit occasioned some lovely copy in the LA Times, including this lede:  “Dissension reigns in the realms of occultism, and there is the grind of clashing auras and the shock of opposing batteries.”

All parties appear to have settled out of court, as the papers contain no mention of a trial date or ruling, and The Boy Wizard’s trail goes cold a few weeks after the lawsuit was threatened.

By October of 1899, Dr. Temple, the Phenomenon, resurfaces as the
manager of Kohler the Oriental Seer, and in new digs, at the California
College of Occult Sciences at 245 South Spring.  But the partnership
turns out to be a short-lived affair. Before three months have passed
the institution and Dr. Temple have vanished. 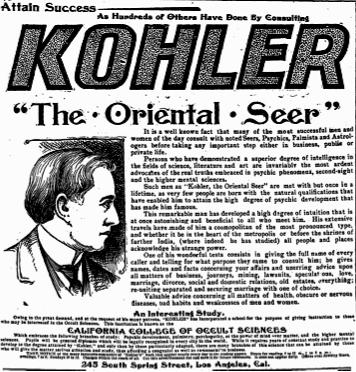