In November 1927 Mary Fraser was sued by her landlords over seven months unpaid rent on the Roma Hotel, upstairs at this address. In court, Mrs. Fraser complained that she had been unable to make a go of the property due to the freak show, The World Museum, on the first floor at 508 South Main. The constant noise from the Museum that frightened off her boarders included shrieks for liquor every 15 minutes, presumably from the side show geek. She said in seven months she’d lost $1260 trying to run to hotel, and her weight had plunged to 80 pounds. The leasing agents had assured her it was “a nice, quiet place.” A month before Mary Fraser was sued for back rent, the World Museum was raided and barker Carl Martin and musician Sam Markian arrested on a charge of advertising on the sidewalk. Markian was nabbed while playing a banjo in a Hindi costume, and was not allowed to change clothes before being booked. The raid was precipitated by a complaint from the Downtown Business Men’s Association that the antics in front of the World Museum were lowering property values and keeping the better class of citizen away. The World Museum finally shut in May 1930 under pressure from the City Prosecutor Nix’s Office and its crackdown on sleaze on Main Street–the operators had been told if they weren’t closed in 24 hours, everyone on the premises would be arrested. 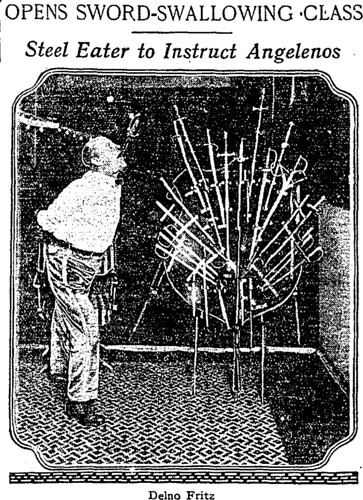