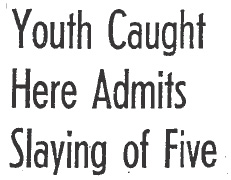 If you were an eighteen year old boy from a small Northern California town and you’d just murdered five family members with a .38, what would your next move be? Raymond Latshaw found himself in that situation and he decided to run to a big city where it would be easier to live undetected. After abandoning his now deceased family in rural Auburn, he headed to the nearest city – Sacramento. Maybe he felt too close to home to be comfortable, but in any case he soon fled to San Francisco where he stayed at the York Hotel on Nob Hill. The York hotel would be featured in Alfred Hitchcock’s 1958 Film “Vertigo”. (In fact the hotel has been renamed the Hotel Vertigo!) I wonder if Hitchcock knew that a young multiple murderer had once lodged there. 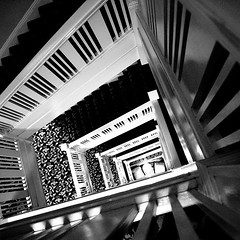 York Hotel Interior With the cops closing in on him, Raymond left San Francisco and boarded a plane for Los Angeles. He booked a room at the Biltmore Hotel and stayed for a couple of weeks, then left without paying his bill. In wartime Los Angeles, Raymond would have found it very easy to disappear because the city was jammed with military personnel and civilian war workers. In fact, if it hadn’t been for eagle-eyed traffic patrolman and 20 year LAPD veteran Clarence Clarke, Raymond may have continued to fly under the radar, just like a German Messerschmitt. But this was not to be. Officer Clarke was directing traffic on Broadway near 7th in front of one of the movie palaces (not identified by name in the LA Times coverage), when he noticed that the doorman bore a striking resemblance to a young man he’d seen on a wanted bulletin. 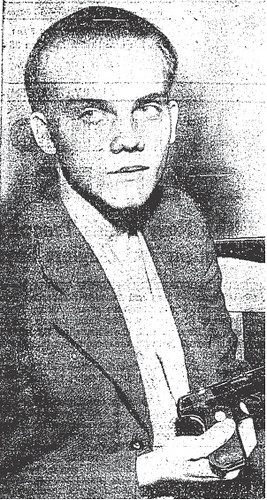 Raymond Latshaw Acting on his hunch, Clarke approached the teenaged doorman. When Latshaw saw the cop coming towards him, he knew that he was busted – he didn’t even try to make a break for it. Identifying himself as the wanted man, he quickly confessed to the slayings. According to the shy and awkward killer, he’d snapped when he heard his father and stepmother arguing. He told LA Times reporters: “I was tending my rabbits when they quarreled. I went and got my father’s gun from the house, and shot him in the head.” Why, after shooting his father to protect his stepmother, did Raymond kill the other four members of his family, including his six year old half brother Charles? Raymond said that they were all witnesses, and he shot them to keep them quiet. Latshaw would ultimately plead guilty in a Northern California courtroom. He was sentenced to life imprisonment in San Quentin.