Awards shows come and go. One awards show that has endured to this day was originally staged by The Count Dracula Society, a non profit group devoted to the serious study of horror films and Gothic literature. Vampires do outlive the rest of us. In fact they just held their 2009 awards on June 24th at the Castaways in Burbank although the emphasis shifted back in the mid 1970’s when it became known as “The Saturn Awards” for The Academy of Science Fiction Fantasy and Horror Films. In its early formative years from 1972-1974 when Count Dracula was still the society’s namesake, what were then known as the “Ann B. Radcliffe Awards” were held at the Alexandria Hotel. 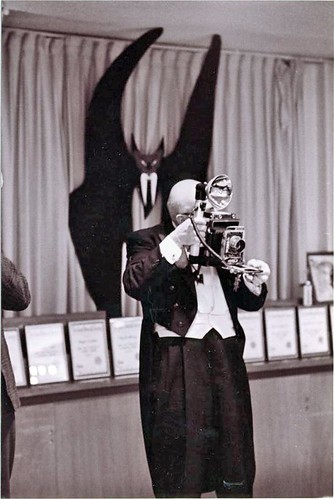 A Paparazzi in front of giant bat and the awards certificates. I attended the ceremonies on April 20, 1972 and April 7, 1973 when my dad received special awards including a bat pin and a certificate. As you might imagine the event had more than its share of eccentricity. The lady receiving guests at the entrance to the ballroom, sported fangs. Rich Correll son of Charles Correll of the famed blackface team of Amos and Andy performed a spot on high pitched nasally impersonation of the Count Dracula Society’s founder Dr. Donald A. Reed (profiled below), Larry Vincent, a.k.a. “Seymour: of Fright Night TV fame on KHJ served as Master of Ceremonies one year and referred to the Alexandria’s ornate glass ceiling by saying, “Welcome to the Poseidon.” The movie “The Poseidon Adventure” had just been released. The crowd got a double dose of my dad’s antics first with a screening of his cartoon, “Beany and Cecil Meet the Invisible Man” and its horror-ific puns. Later he put on his Cecil the Sea Sick Sea Serpent hand puppet when he accepted his award. As a movie buff I have to say that forgiving all that wackiness, the event was one classy tip of the hat to the era of bygone glamour. 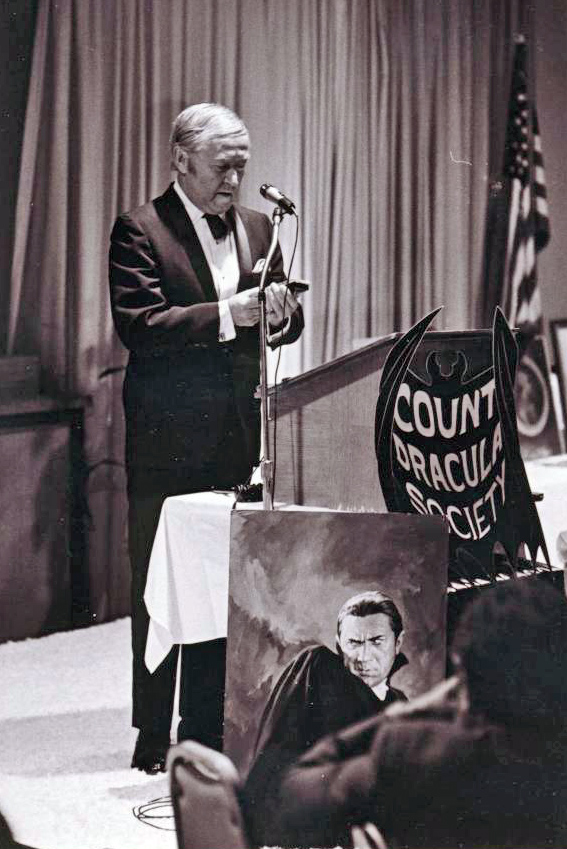 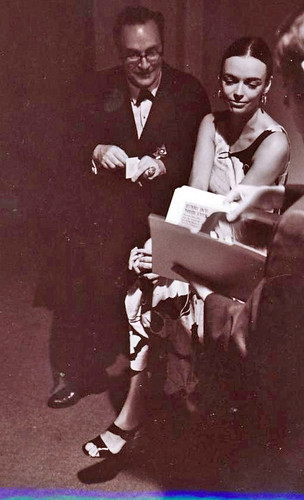 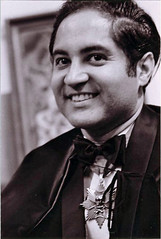 Dr. Donald Reed Reed was a well educated New Orleans transplant, but his life was full of contradictions. He was a middle aged man who lived with his parents in the West Adams district. He had a doctorate in law and yet served as a law clerk. He also worked as a substitute librarian around town. He later taught at Woodbury College. His true love was Hollywood history and all its glitz and glamour. Reed somehow managed to turn an organization named “The Count Dracula Society” and its yearly banquet into a must attend event for screen legends. This was in spite of the fact that Reed had perhaps one of the weirdest habits ever seen outside of Transylvania. When Dr. Reed met you and spoke with you (always wearing a dark suit by the way), he would move in very close. All the while he never looked you in the eye. Rather, he stared at your neck. It must have been charming to his society’s members. To the rest of us it was shall I say distracting? 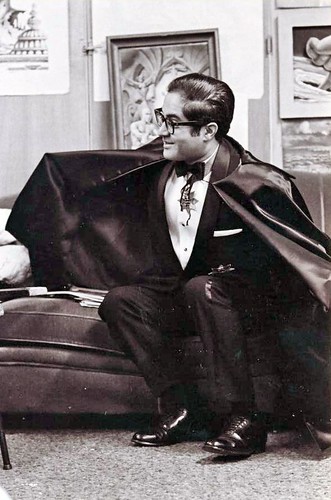 Dr. Reed going batty. Over the years Dr. Reed consistently grew his society and presented awards to some of the most famous filmmakers of all time including James Cameron, George Lucas and Steven Spielberg. His awards were even televised for a few years when Science Fiction films like Star Wars hit box office warp speed and beyond. In going Hollywood, Dr. Reed became a full fledged publicity hound. A young filmmaker even followed Dr. Reed around with a camera for several months to record Dr. Reed’s last days, failing health and all in the 2003 released documentary, “My Life with Count Dracula.” That young filmmaker was this year’s Academy award winning writer of “Milk,” Dustin Lance Black. Dr. Reed died in Los Angeles in 2002. The official Donald Reed website which paid tribute to him got much of his story right, but not all of it. It points out that Dr. Reed got to know Walt Disney when he worked as a librarian at Cal Arts the Disney funded Arts University. If he got to know Walt Disney it would be from the beyond because the Disney family broke ground on Cal Arts two years after Walt Disney’s death. Still, I wouldn’t put it past him. Photos Courtesy of Linda Cervon