In ancient times, the Greeks wrote of three beautiful Sirens – women who were part bird and part woman, and who lived only to seduce sailors with their haunting songs.Sailors who charted a course near islands inhabited by the Sirens were inevitably shipwrecked, their vessels smashed to bits on nearby rocky shores. 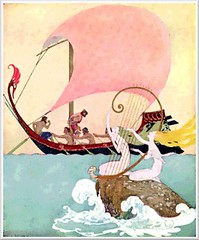 In modern times, Sirens were more likely to inhabit a bar stool than an island. The unlucky sailor who fell for a modern Siren may not have been literally dashed to bits, but he would suffer a similar symbolic fate – a broken heart.

Dominga Villa, a young sailor from the Philippines, first laid eyes on Emma Hanmore in a Main Street dance hall. Emma danced her way into Dominga’s affections, and then slipped a greedy hand into his wallet. The lovesick sailor lavished the dancer with gifts and cash until he was tapped out.“She broke me,” he said. “I love her. I give my life for her but she just fool me and then say bah, she not want me.”

After turning up unannounced at Emma’s apartment with the last of his cash, Dominga was crushed when he saw another man’s clothes draped over a chair. He demanded an explanation, apparently not realizing that what he’d bought and paid for was Emma’s time and the pretense of a relationship, not her love. Perhaps her secret heart wasn’t for sale, or maybe the man’s clothing in her apartment belonged to another in a long line of suckers.

Emma was able to divert Dominga’s attention from the mystery man’s clothes in her apartment by agreeing to meet him at the dance hall that evening.They later returned to Dominga’s hotel room, where Emma told him that she was finished with him.

Dominga was shattered — his love had been abused. Even worse, the woman didn’t show any remorse for having played him. In fact, she sardonically sang him a love song, and laughing, prepared to walk out of his life. Dominga later recalled “I went mad”, pulling out a pistol and gunning Emma down.He then turned the weapon on himself but was only injured, and lived to tell his story in court.