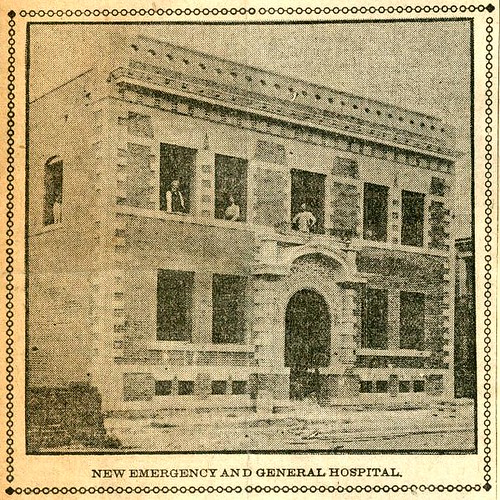 Officer Gifford, on night patrol on Crocker street, heard a call for help and saw three men chasing another man down the block away from him. As he set off after them, Gifford saw the man in the lead leap up the steps at the entrance to the emergency hospital, just as the foremost of his pursuers tripped and fell on the sidewalk, sending his pistol skidding across the cement. At this, the one who had been being chased ran back down the steps, snatched up the gun and pointed it at the prone man.

By the time Gifford reached the entrance to the hospital, the other two pursuers had run off, but the man who had tripped was still there, held at gunpoint. Both men started shouting at Gifford to arrest the other, so he did the only sensible thing and arrested both of them.

The man who had been being chased was S Mahoney, a railroad engineer employed by the Santa Fe, who lived at 415 Crocker street. The man who had tripped was H A Smith, who turned out to have been a special police officer until he had been dismissed for certain unspecified irregularities. Despite the fact that he had since taken up work as a deputy constable, the police and detective agencies regarded him as “a bad man”. Indeed, a few days previously, he’d been involved in an abortive bit of gunplay involving a detective whom he’d met in a saloon. After threatening him “with all manner of evil”, Smith had gone for his gun, but the detective had been quicker on the draw and Smith had found himself being escorted out of the saloon at the barrel of a Colt, which would make Mahoney the second man in a matter of days to be on the point of shooting Smith.

Mahoney told the police that, after catching a show at the theater, he’d gone to a saloon on Fifth street, where he’d met Smith and his two companions, with whom he’d shared a few drinks. When he was on his way home, he realised that his former drinking buddies were following him and increased his speed, at which the three men did likewise. As he drew near to the building where he lived, Mahoney heard Smith shout, “Stop or I’ll shoot!” which he took as his signal to start running and crying for help. The police released Mahoney. Smith was taken to the cells and the two men who’d fled — known associates of Smith’s called Charles Burrell and William Jasper — were arrested the next day.

At the trial in police court, which took place a month later, Smith finally got a chance to tell his side of the story. He explained that, while having those drinks with Mahoney, he had formed the view that Mahoney was a suspicious character deserving of further investigation. In particular, Smith explained, he had doubted Mahoney’s word when he said that he lived on Crocker street, and had decided to follow him when he left the saloon in order to verify the truth of the statement. However, owing to the investigators’ consumption of alcohol, their surveillance technique might not have been as covert as it might otherwise have been and they evidently alarmed Mahoney, who thereafter misinterpreted their calls for him to stop so they could explain their presence as calls for him to stop so they could rob him. Misunderstanding had piled on misunderstanding, according to Smith, resulting in the regrettable situation in which a terrified Mahoney had ended up holding a gun on a slightly inebriated but otherwise diligent deputy constable lying stretched out on the sidewalk outside the emergency hospital.

Faced with two conflicting accounts, which overlapped only to the degree that each party agreed that the other parties had been drunk, the police justice dismissed the charges. The question of whether Smith was a bad man or merely a bad law enforcer remains unanswered.