I learned to love all of Hollywood money
You came along and you moved me honey
I changed my mind, looking fine
Goodness gracious great balls of fire – Jerry Lee Lewis 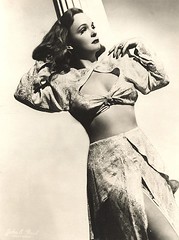 Betty Rowland, the Red-headed Ball of Fire (aka the Rhode Island red-head) was a force to be reckoned with during the heyday of burlesque.  She had a stage presence that belied her diminutive stature and she was the highest paid dancer in her field.

Betty was only in her teens when she began dancing professionally at Minsky’s in New York. Burlesque houses thrived in NYC during the early 1930s, but by 1935 citizens groups were trying to close them, and Mayor LaGuardia had deemed burlesque a “corrupting moral influence”.  The city’s licensing commission tried pull Minksy’s license, but the State Court of Appeals refused to do so without a criminal conviction.  In 1937 the mayor and the citizen’s groups finally got the break they’d been waiting for when a stripper at Minsky’s was discovered to be working without her G-string. That was enough for criminal charges to be filed, and Abe Minsky’s license was revoked. 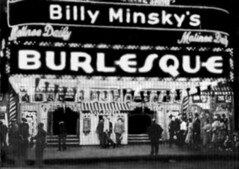 Minsky’s was the first domino to fall.  New licensing regulations would allow the burlesque houses to remain in business, as long as they didn’t employ strippers!

The death of burlesque in New York was probably one of the reasons why, in May of 1938, Betty and her troupe opened in Los Angeles at the Follies Theater on Main Street. It was supposed to be a limited engagement, but L.A. audiences loved Betty and she would continue to perform at the Follies for most of her long and successful career. 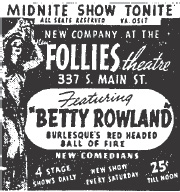 In August of this year I was fortunate enough to meet Miss Rowland – she was special guest on Esotouric’s “Hotel Horrors and Main Street Vice” tour. She was absolutely delightful! Vivacious, and still sporting her famously red hair, I found her to be a very classy dame indeed.

There are so many great stories about Betty that it was tough for me to keep my questions to a minimum. But the one tale that I was most curious about was her arrest in 1952 for giving a lewd performance.  It struck me as strange that after working in Los Angeles for about 15 years (with only one misdemeanor arrest in 1939) her act was suddenly considered to be lewd.  I knew there had to be more to the story, and there was.

Betty said that one night two LAPD cops arrived at the Follies expecting to get a free pass, but theater manager Maurice Rosen was firm – no freebies.  In retaliation, cops hauled Betty and Rosen off to the Lincoln Heights jail!

On November 14, 1952, Maurice and Betty would each be sentenced to four months in the slammer; however, a few weeks later the Los Angeles Times reported that Judge Walters had modified Betty’s sentence – in part because her attorney had said that Betty was quitting show business to open a perfume store in Beverly Hills with her sister Rose Zelle.

Of his decision to release Betty, Walters said: “The value of incarceration seems to have made its effective marks.”  Jail had undoubtedly made an impression on Betty; she said that it was a horrible experience.  The true story of Betty’s premature release from jail never made it into the newspapers. From what Betty said, it had been strongly “suggested” to her that if she paid a fine something might be done about reducing her sentence.  According to Betty it was a substantial amount of cash placed in the right hands (and not the Judge’s soft heart) that resulted in her release from City Jail.

If you’d like to see Betty in action, you can view a video clip of one of her performances on YouTube.  You are in for a treat.