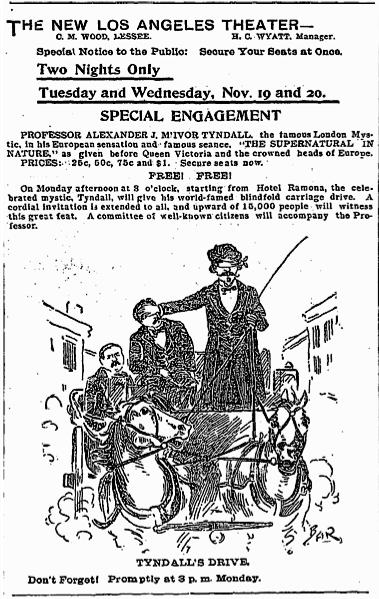 Peter LaFleur managed to win a championship blindfolded in the film “Dodgeball,” so how hard could it possibly be to drive a horse-drawn carriage at a breakneck pace through the streets of downtown Los Angeles while likewise deprived of sight? That was the challenge mind-reader, mystic and clairvoyant Professor J. McIvor Tyndall faced on November 18th, 1895. As a crowd of onlookers blocked traffic and sidewalks in front of the Hotel Ramona, the blindfolded Professor Tyndall took the driver’s seat in an open barouche, accompanied by his passengers, including the Chief of Police, the city clerk, and the Professor’s partner in adventure, Dr. K.D. Wise. Tyndall took up the reins and whip in left hand, while with the other he grasped Dr. Wise’s hand, who sat beside him. Not only did Tyndall aspire to drive the horses blindfolded through the city, he also aimed to find an unknown object hidden by the members of his entourage somewhere in the vicinity of the hotel. Somehow, no doubt due to his heightened mental sensitivity and muscle-reading powers, Tyndall managed to lead the horses on a wild dash down Spring Street, missing by mere inches streetcars, trucks, carriages and terrified pedestrians. He whirled up Fourth, turned on Broadway to Second, and then eastward on Second where he pulled the horses up short at the side entrance of the Hollenbeck Hotel. Still blindfolded, and still grasping the hand of his friend and accomplice Dr. Wise, Tyndall felt along the façade of the stair entrance to the Hotel, where he quickly found a feather duster hanging from a nail above his head. He grabbed the duster,  re-embarked into the carriage along with his amanuensis, Dr. Wise,, and drove pell-mell back along the route he’d come. Astonishment ensued among the crowd when the carriage arrived at the steps of the Hotel Ramona, although a few onlookers observed that in previous years Tyndall had performed the exact same feat, and that on these occasions the object had been hidden in the exact same spot. 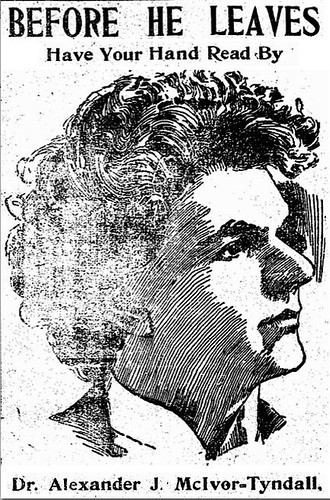 Tyndall’s ambitions did not end with mind-reading. He also aspired to cheat death. In December of 1985 he announced plans to place himself in a hypnotic trance, be buried alive in an airtight ten foot deep grave, and then be disinterred and resurrected at the end of thirty days. Taking his cue from Hindu fakirs, Tyndall’s method also required that he be coated in clarified butter. However, when his assistants learned that to bury a human being intentionally, even with his or her consent, constituted a felony, they declined to follow through on their end of the bargain. While they educated themselves about the law, Tyndall lay in a cataleptic state for 32 hours, until he was finally awakened by these words, “Professor! Professor! Without quotation marks! Here’s the bold bad Times reporter and he says he will never put quotation marks around your title again if you’ll only wake up!”

Tyndall continued his mystic exhibitions, lectures and experiments for years in the LA area, eventually graduating from “Professor” to “Dr.”, and establishing an institute of psychic science at Grand Avenue and 15th streets. The founder of his own movement, the International New Thought Fellowship,Tyndall is also the author of a number of books, including Cosmic Consciousness, or the Man-God Whom We Await, How Thought Can Kill, and The Spiritual Function of Sex. After a lifetime investigating the land of Spookdom, Dr. Alexander J. McIvor-Tyndall died for good in 1940.